Improvements Intended to Improve Traffic Flow in Face of Development 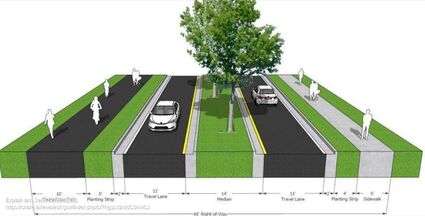 A new divided profile would create a safer corridor on Buck Moore Road pending Polk County participation in a revamp of the busy connector. Left-turn lanes and roundabouts, along with new bicycle and pedestrian features and landscaping are part of the plan accepted by the city commission.

A divided boulevard featuring median plantings, turn lanes, sidewalks, bikeways, and efficient traffic roundabouts may be in the future of Buck Moore Road, depending upon the cooperation of Polk County in improving the county-maintained road.

The corridor has been a concern for area residents as traffic has grown in recent years, and another 684 single-family homes are planned for construction along the one and a half mile connector link between SR 60 and Burns Avenue.

The road is designated CR 17B, part of the county network. While it currently meets level-of-service (LOS) standards with peak-hour ratings of LOS C, certain turning movements are already strained, and some would fall to E or F grades if nothing is done. By following the plan is, engineers project the LOS will actually improve at each point, to LOS A or B.

The proposed design, intended to handle the increased traffic expected from new developments in the area, was the result of a $25,000 traffic study funded by the City of Lake Wales.

Principal Transportation Planner Brent Lacy of VHB, the consultants who conducted the study, assured commissioners that "the county will certainly work with us" to improve the corridor. He said that county transportation planners do not normally see these studies performed by cities, nor offers to participate in the solutions.

"It's not often that a community advances the analysis, takes the results to the county, and says 'hey, we're willing to partner," Lacy said. Sufficient right-or-way exists to accommodate the new features, he said.

The proposed plan would replace a signalized intersection at Burns Avenue and Buck Moore Road with a roundabout. It would also replace the stop-sign intersections of Sunset and Grant Road with new roundabouts. Travel lanes would be reduced to 11 feet, with a median allowing for turn lanes and landscaping.

Along with other improvements, the dead-end rails-to-trail segment at Buck Moore Road would be extended both north and south along the corridor to connect to other new or existing trails. Sidewalks would be completed along the east side of the road, permitting access to a bus stop near the intersection of SR 60..

Deputy Mayor Robin Gibson cited the success of the roundabout constructed at the intersection of Hunt Brothers Road and Scenic Highway several years ago, and the plans to create others as part of the Lake Wales Connected plan. "They set the upscale tone."

"With that quality you also attract a higher quality of residential development," Gibson said, "which has its own enhancement of general revenue for the city." 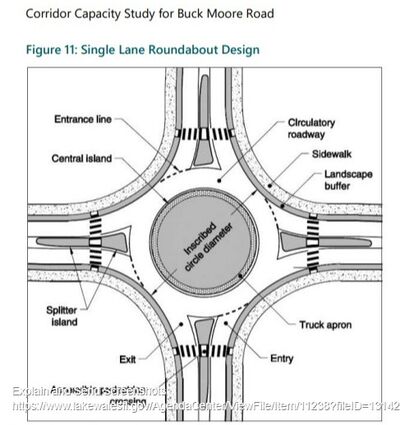 Three new roundabouts would smooth traffic flow and eliminate signals along the Buck Moore Road corridor under the plan adopted by the Lak eWales City Commission. Implementation of the plan on the county-maintained road will depend upon sharing expenses for the improvments.

Commissioners asked about the relative costs of installing traffic signals versus roundabouts and were told that they were roughly twice the cost of signals, but did not require electricity or maintenance like signals, and handled traffic more efficiently. In the aftermath of a Hurricane, they would be "ready to go."

Lacy also explained that any accident occurring at a roundabout would likely be a "fender-bender" without serious injury, unlike the "T-bone" crashes that happen when a driver runs a red light.

Beyond the development slated to occur along Buck Moore Road, other planned housing would combine to roughly double the volume of traffic on the corridor. The study also analyzed the share of traffic coming from sources outside the city, including county and regional travelers.

Commissioners were enthusiastic about the proposed improvements, and authorized city staff to approach county transportation staff about a shared project.