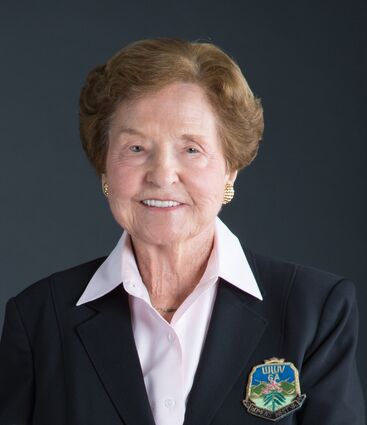 Maxine Merrill Gilmore, 101, and formerly of Lake Wales, FL, died in her Whispering Pines, NC home surrounded by love and family on August 6, 2022.

Maxine is survived by sister-in-law Mildred B. Merrill, five children and spouses including Susan G. Mouyal, William E. Gilmore Jr. (and Mary Lee), Dr. John W. Gilmore II, Betsy G. Balassone, and Scott M. Gilmore (and Kimberly); five grandchildren; one great-granddaughter; and many dear nieces and nephews. Maxine was also affectionately known as a coach and mentor to many.

Maxine attended Bradley University and graduated from the University of Wisconsin – Madison with honors where she and Dr. Gilmore met. The Gilmores raised their family in the Parkersburg, WV area before retiring to Lake Wales in 1994 and then splitting their time between Lake Wales and Whispering Pines before establishing residence in Whispering Pines in 2012.

Active and supportive of numerous community organizations throughout her life, Maxine was also a very accomplished golfer, declining an offer to be a professional golfer from Wilson Sporting Goods at the age of 17 to continue her education. At the age of 50, Maxine began a streak that included winning the United States Senior Women's Golf Association Championship three times and the West Virginia Women's Senior Amateur six times. She was proud to represent West Virginia in the prestigious Virginias – Carolinas Team Matches 20 times, where she also served as captain of six winning teams and was honored at the 50th anniversary of the matches in 2006.

Maxine competed in the USGA Senior Women's Amateur eleven times, Pinehurst's North & South twice and North & South Senior nine times, the Bermuda Amateur three times and the Mexican Amateur. She served as director of the Women's Southern Golf Association for ten years where she was senior medalist three times and won the Super Senior trophy in 1992. She was also Senior Medalist and Match Play Senior Champion at the 1976 Broadmoor Invitational. Along the way Maxine won a total of 36 club championships and recorded seven holes in one. The West Virginia Women's Amateur Player of the Year has been awarded the Maxine Merrill Gilmore Trophy annually since 2008.

Boles Funeral Home, Southern Pines, NC is handling the arrangements. A memorial service is being planned for a future date. In lieu of flowers, memorial donations may be sent to the charity of the donor's choice in honor of Maxine Merrill Gilmore.