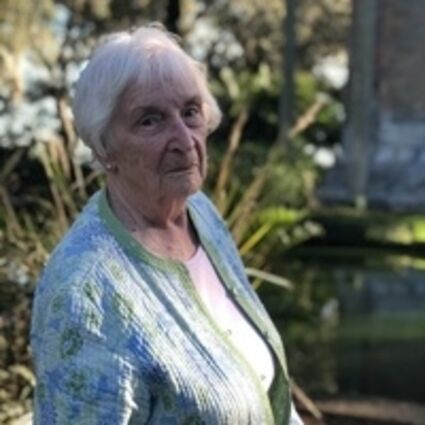 Alice Boyle Duffy, longtime resident of Hingham, Massachusetts, passed away Thursday, September 8th, from complications following a stroke in Winter Haven, Florida, near where she had been living with her daughter Clare. She was 93 years old.

She was born in Philadelphia, PA, the daughter of Francis Xavier "Pete" Boyle of Philadelphia and Alice Villere Lewis, formerly of New Orleans. Both were artists educated at the Philadelphia College of Art, and her father also hosted a children's television program in the pioneering days of that medium. Alice was the eldest of four children - her sister Sidney, brother Peter and younger sister Daisy all predeceased her.

She earned her BA at Trinity College in Washington, DC in 1951. While an undergraduate, she performed for two summers with the Genesee Valley Players, It was during one of those performances that she was spotted by the man she would later marry, Benedict J. Duffy, Jr., a physician from Rochester, NY. They had three children - the late Alice Katherine "Kate" Duffy, Benedict J. Duffy III, and Clare Duffy Swift. The family lived in London, Short Hills, NJ and Washington, DC before moving to Hingham in 1966.

In Hingham, she contributed to the community at the South Shore Conservatory and on the Planning Board. However, her heart was always in the theater. The entire family was involved, at varying times, with many acclaimed community productions, including those run by friends Judy and Derek Holmes and their "Elizabethan Companie", which performed at New North Church. The productions became a true family affair when the Duffys' son Ben married Judy and Derek's daughter Amanda in 1984.

Her acting career took off in earnest when she was cast in several professional productions in the Boston area, at the Huntington Theatre Company, Lyric Stage, Boston Playwrights Theatre and the American Repertory Theatre, among others. In addition to stage work, Alice acted in several television shows, commercials and feature films, including Housesitter with Goldie Hawn and Steve Martin and School Ties with Brendan Fraser and Ben Affleck. The whole family was thrilled for her success - perhaps no one more so than her late brother, the actor Peter Boyle.

In 2010, Alice made her Broadway debut - at age 81 in a revival of the Noel Coward play Present Laughter. The production was first staged at the Huntington Theater in Boston, and when the Roundabout Theater Company opted to stage it in New York, its star, actor Victor Garber, agreed to reprise his role but only with the original Boston cast - a magnanimous gesture that enabled a number of actors, including Alice, to realize the dream of appearing on Broadway. It was a small part, but as with everything she did, she made the most of it.

In addition to the theater, the great joy of Alice's life was her family - especially her grandchildren Rosalind, Alexander and Elliot, and great grandchildren James, Beatrix and Harold. She reveled in their many accomplishments, and loved keeping track of them via the technology that she didn't quite master but thoroughly enjoyed. Being able to see her third great grandchild via FaceTime from Australia in recent weeks meant the world to her.

In addition to the aforementioned, Alice will be dearly missed by her son-in-law Edward Swift and his family, and granddaughter-in-law Katherine McDonald Duffy of Sydney, Australia.

There will be a celebration of life in Hingham, MA at a later date.