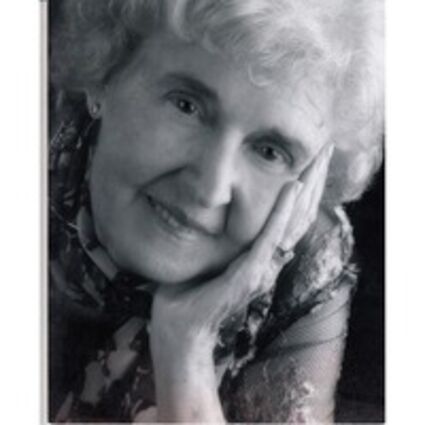 "Oh, What a Beautiful Mornin" is the song Harriett Griffin Harris would sing to all of her campers every early morning for 30 years. On November 17, 2022 at 5:29 am, Harriett's dawn began with a light, brighter than the sun, and in the arms of her Savior, Jesus Christ. She was accompanied with the singing of her family in her home surrounding her until her glorious, beautiful morning.

There's all of us, and then there's Harriett. There's no one quite like Harriett with 2Ts. She was born in Lake Wales, FL on July 28, 1934 to Frances and Ben Hill Griffin, Jr. She was the oldest or "top" of her 5 siblings. She was a rodeo barrel racer, a cheerleader, an athlete, Student Body President, and the Valedictorian of her class at Frostproof High School. She grew up working on her family's ranch built during WWII. At an early age, she was hunting stray cows and branding calves. She grew up with windmills and signals with swinging lanterns. Riding a horse and working with cow dogs was like walking for her. Without electricity, every bedroom off of the porch had a shelf for each lantern. Her childhood was spent on the ranch, working at the Frostproof drug store counter, and studying for her grades. Her school counselor showed her a brochure on Agnes Scott College in Atlanta. She had never been for a visit, but she boarded a train and went to Atlanta, with her trunk, by herself. There, she majored in Biology and was a Sweetheart of the Sigma Chi fraternity at Emory.

She caught the eye of a blond, blue-eyed boy from Americus, Georgia named George Harris. He was the Student Body President at Georgia Tech, and together, they were a force of nature. Both of them had larger than life personalities. One was just as go-getter fun and service oriented as the other, and together, on June 30, 1956, they married and moved to Key West, FL to complete George's service in the Navy.

After the Navy, of all places in the world, they moved to the oak-covered, Mayberry-like, beautiful city of Bartow, Florida. Harriett and George were blessed with three children and started 64 years of friendships on Margaret Avenue and by the Laguna Serena. Harriett loved the First Presbyterian Church of Bartow, and she served there, faithfully, for 64 years. She taught Sunday school and she was on every committee and in every Bible Study possible. Mostly, she was known as the one who was the last-to-leave on a Sunday. There she was in the courtyard, with her children begging her to go home, as she found one more person to talk to. She was listening to the young and the elderly, she was praying with those who were hurting, and she left everyone with a laugh with her pocketbook that read, "Don't follow me, I'm lost too."

Her service reached out to the community as she and Bobbie Henry started the adventure of their lifetime with a small Girl Scout Troop. Just like her mother, Harriett wanted to be a Girl Scout leader and influence young girls. For the next 14 years, Harriett hammered in the stakes of her tent, packed painted lard cans from the bakery with clothes, made patrol charts, hung her mess kit in a tree to dry, taught CPR survival classes, and camped throughout the state of Florida.

The girls of Troop 43 sold cookies at Publix and carried Tom Watt boxes to sell all over Bartow to raise money to travel to the Bahamas, Savannah, and Williamsburg, VA. During the Bartow Halloween parade, Troop 43 was annually walking down Main Street dressed as oversized flowers, or "things go better with coke," or pyramid shaped candy corns, or oversized green peas from the can of the Jolly Green Giant. Of course, Harriett was the Jolly Green Giant in the parade, and she walked down Main Street on stilts no less. She was a leader and all the girls followed. She gave the girls the confidence to build a fire in 3 minutes, and cook their own meals, to put on skits and sing around the campfire, and to survive in the outdoors without electricity. She gave the girls the gift of independence because she only put up one tent, her own. Her greatest gift to the girls was her wonder of the world that God created. "Oh, girls, look at the beautiful Blue Heron, or look at the sunset through the trees, or look at the small frost on a Florida morning."

Everything began with Harriett's embrace of every day, and it was started by the somewhat out of tune, "Oh, What a Beautiful Mornin" to the sleepy girl scouts still tucked in their warm sleeping bags. Harriett Harris was a leader who led by doing. She was in one word, a trooper. Harriett gave every girl the humble privilege to follow her and Bobbie Henry into the adventures of a lifetime with Troop 43.

As if that was not enough, Harriett decided to learn how to white-water kayak and canoe in her forties. Her love of paddling the Peace River in Florida in her red canoe, took her to the challenge of North Carolina's white-water rivers. For fifteen years, she taught white-water canoeing and kayaking at Camp Greystone for Girls in Tuxedo, North Carolina. The stories are the same. She woke up the girls with singing, she let the young girls spend the night in the canoes in the middle of the lake, and she taught safety rules and knots and strokes to navigate the current and the rocks of the river and of life. "Girls, look at that magnificent moss on that rock, look at the queen on the Queen Ann's lace flower, now, catch that eddy at the top of Delebar's rock, and if you miss it, go back and do it again!" Many women with children now say that "Harriett Harris is the one person who has had the most influence on my life, after my parents."

We all follow Harriett as she follows Christ, and "Oh, What a Beautiful Mornin" it is.