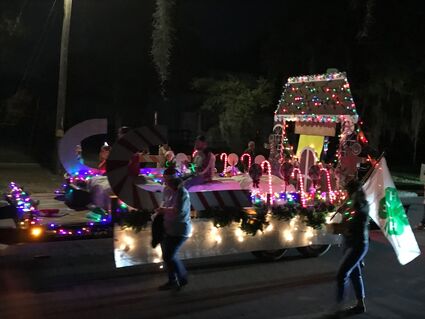 Floats ablaze with lights are a major attraction at the annual Lake Wales Christmas Parade.

Music, tens of thousands of lights, and the official arrival of Santa Claus will mark the Lake Wales Christmas Night Parade, sponsored annually by the Kiwanis Club of Lake Wales. The parade, which typically draws several thousand spectators, will step off at 6:00 pm Saturday from a line-up area along Lakeshore Boulevard before heading west along Central Avenue through the downtown area before dispersing at the City Administration Building at Central and Dr. Martin Luther King Boulevard. 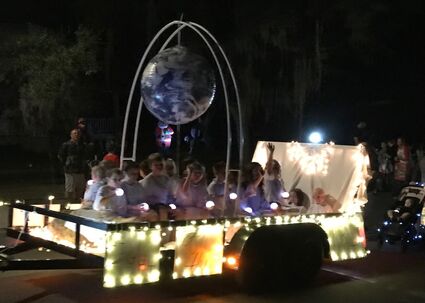 This year's parade theme of "A Dreamer's Christmas" will honor Barney Moore, a community activist who for many years had suggested new themes each year to highlight features of the community. Moore, who died in May at the age of 61, was a member and former president of the Kiwanis club, and widely loved for his "can-do" spirit despite his cerebral palsy-induced quadriplegia.

"Barney, for years, chose the theme, and of course he loved Christmas," long-time Kiwanian Larry Tonjes told LakeWalesNews.net, adding that "Everyone loved Barney, especially kids, who are prone to stare at someone who looks different. We would always ask them, 'Have you ever been to Barney's Dream Park?' and of course they said yes, and we would tell them "Well, this is the dreamer!' He was always happy to share with them."

Moore's vision of a park where all kids, regardless of ability, could play together was his long-time dream. The park is a reality, standing appropriately in Kiwanis Park on North Lakeshore Boulevard.

In Barney's memory, participants and spectators alike are invited to wear their best "dress pajamas."