Highlanders Close Out Post-Season With 12-1 Record 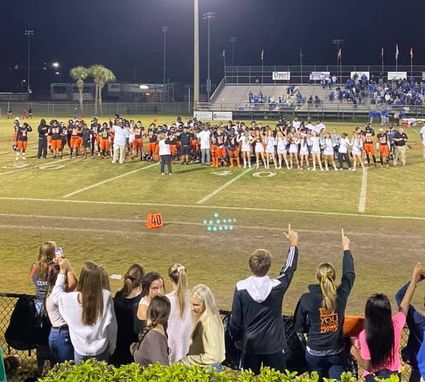 Team and Cheerleaders Gather on Field for Closing Alma Mater

With 10 players out with the flu the week of their Regional Final against Tampa Jesuit including star quarterback, Eric Williams, the Lake Wales Highlanders gave it their best effort against all odds.

In a sport where injuries cause coaches to get creative illness isn't often a factor as it was in last Friday's game. Incidentally, it just happened to be the most important game of the season.

In a lopsided Class 5A High School final the formerly undefeated Highlanders finally lost their first contest for 2019 at the hands of foe Jesuit Tigers, 53-21.

In a game that began with an out of bounds kick off followed by a first play jitters penalty the Tigers' Ricky Parks blasted up the middle for a 60-yard romp into the end zone for a quick 7-0 deficit with only 12 seconds ticking off the clock.

A number of penalties mostly without provocation further put Lake Wales in the hole while making Tampa Jesuit's job easier. Barely into the 2nd quarter the Highlanders were down 20-0.

Digging deep, Lake Wales drove almost the length of the field to score a touchdown after a 64-yard run by Senior standout Johnny Richardson. A 2-point conversion made the score 20-8 on a pass from Richardson to Senior Garret Reynolds.

But a last minute of the 2nd quarter field goal by the Tigers sent the Highlander team to the dressing room down 23-8. But an opening second half scoring drive by Jesuit gave them a 30-8 lead.

Besides Richardson's exciting run another memorable Highlander highlight came when Sophomore stand-in quarterback Isaiah Jordan airmailed a pass to the opposite field where Reynolds gathered in ball and raced into the end zone. 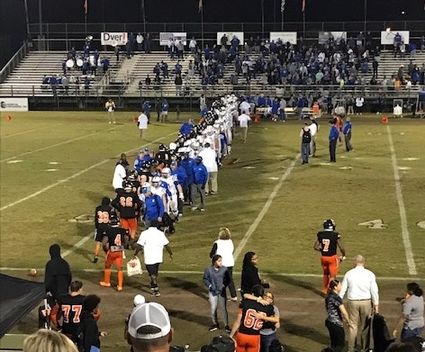 It was plays like these that sent opponents packing over the season which held many great moments, cheers and thrills.

Coach Tavaris Johnson summed it up in a heartfelt post telling the team: "What an amazing time we shared!!!! We had an unforgettable season."

Johnson went on to say "As we close this chapter on an exciting 2019 season, I want each of you to remember the times we've share, the lessons learned, and the goals you set out to achieve. Words cannot explain how proud I am to serve as your Head Coach.

"To my Seniors...Never forget the things you've accomplished! Never doubt who you are and always know and remember where you are going!

"We have fought a good fight, so hold your heads high and know you have achieved greatness!"