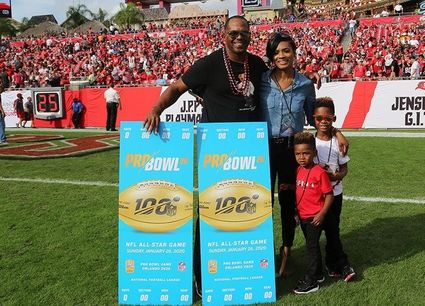 To qualify Coach Johnson won Week Ten's Coach of the Week, and through a voting process, came out on top to win the prestigious award over the other ten nominees. The program is sponsored by Tampa Electric (TECO) and the Tampa Bay Buccaneers Foundation.

Johnson is the varsity football head coach at Lake Wales High School and part of the Lake Wales Charter Schools.

Displaying a strong rapport and earning respect from the players and providing leadership in the form of exhibiting positive behavior are other important qualifications considered in the selection.

After winning Week 10 of 11 possible weeks throughout the football season, Coach Johnson became eligible for the 2019 designation of Coach of the Year.

"Now that I've been selected I'm thrilled with having been chosen," stated Johnson. "I am deeply grateful, surprised and humbled.

"All I can say is all our hard work along with the support from the community-it takes a village-exceeded our goals," Coach Johnson added. "This is not all about football as much as it's about what happens after the game has ended."

Looking at the big picture is something Johnson knows and understands. He is extremely aware that many players face hardships, obstacles and difficulties outside of both sports and school that through mentoring and caring the youth under his guidance overcome and experience success in both football and in life.

"We will have seven players move on to Division One colleges to continue their careers," Johnson boasted, "which is basically unheard of."

Other criteria for selection was exhibiting positive behavior, involvement with outside organizations and community programs which this designation will provide for Coach Johnson in the months ahead.

For example, Johnson took a tour of AdventHealth Training Center at One Buc Place, and he was invited to lunch at the facility and meet with Buc's Head Coach Bruce Arians.

As part of the award, his program was presented with a $2,000 grant to go along with an equal amount presented to the school by winning the Coach of the Week award in Week 10 of the season.

Other benefits include becoming the Tampa Bay Buccaneers nominee for the NFL's 2019 Don Shula High School Coach of the Year Award and a Pro Bowl experience still to come.

The Highlanders went 10-0 in the regular season, and lost to Tampa Jesuit in the Regional championship game at home to end their season 12-1.

"When all is said and done we want a healthy program," reflects Coach Johnson. "We have a 'No Athlete Left Behind' initiative that we adhere to which prepares and turns boys into men."

WFLA's Sports Anchor Dan Lucas who was instrumental in certifying the Coach of the Week nominees said, "It's great to see. You're talking about a program he put on the map.

"We're talking about seven counties within reach of the Tampa Bay Bucs viewing audience. This is real milestone for Polk County and Lake Wales in general," Lucas noted.