Alum of School Was Born and Raised Here, Still Gives Back

Thursday was an exciting day for both students and administrators of Lake Wales' McLaughlin Middle/High School as they broke ground for a new $15 million gymnasium, and welcomed back former student Amar'e Stoudemire to give a keynote address. Stoudemire brought a message of encouragement to students hoping to follow his success as a "student athlete. "Hard work" was the repeated theme he share. Highlighting the need for education as well as athletics, he proudly announced his graduation tomorrow from the University of Miami.

McLaughlin is being expanded to serve as a high school as well as middle school, and this school year welcomed their first freshman class. They will continue adding a new grade each year until 2025. The new gymnasium will serve the full line-up of athletics anticipated for the McLaughlin Phoenix teams.

Unlike most schools in the Lake Wales area, McLaughlin is not a part of the Lake Wales Charter Schools system, but is operated by the Polk County Schools.

The decision to add a high school to the campus was only reached by the Polk School Board in June.

Principal Dr. Debra Wright-Hudson has led the school from its former "D" rating to become a magnet for the arts. "She has 'right stuff," former Polk School Board member Sarah Fortney said of Dr. Wright-Hudson. "It falls back on her DNA," she said, a reference to her family's storied history in local education. Fortney was an enthusiastic cheerleader for the school's success.

Wright-Hudson's formula has included bringing in grants from a variety of private and public companies to enhance the teaching facilities and capabilities of the school.

The school's 38-acre campus has room to hold a number of new facilities, and plans include converting an existing running-track into a sports stadium. The Polk School Board previously entered into a joint-use agreement with the City of Lake Wales, which will allow use of the facilities for other public events.

The 28,300 square-foot gymnasium will host a variety of athletic programs, including basketball, volleyball, weightlifting and wrestling.

As part of the planning for the expansion, McLaughlin staff have conducted listening sessions to gather input from students, teaches, parents, and the broader community. 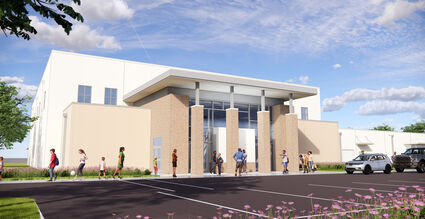 An artist's rendering of the new McLaughlin Gymnasium features a classic design. The building will be constructed to serve as a hurricane shelter for east Polk County, something desperately needed in the area.

The planned gymnasium will be constructed to storm-resistant federal standards to serve as a Hurricane shelter.

According to a statement issued by the Polk School Board, the new gymnasium is only one of several major projects coming to McLaughlin. Future upgrades will also include a new auditorium.

Dirk Heller, manager of the Tampa division for general contractor Williams Company, called the project "amazing" for the "impact it will have on the school and the community." Company President Chris Rollins added that "this is a great project for the community," adding that his company has been building schools since 1950, and that the project will "be right, it will be on time, and it will be delivered with outstanding customer service." Construction is expected to begin in a few weeks and be completed before the start of the school year in August, 2024.